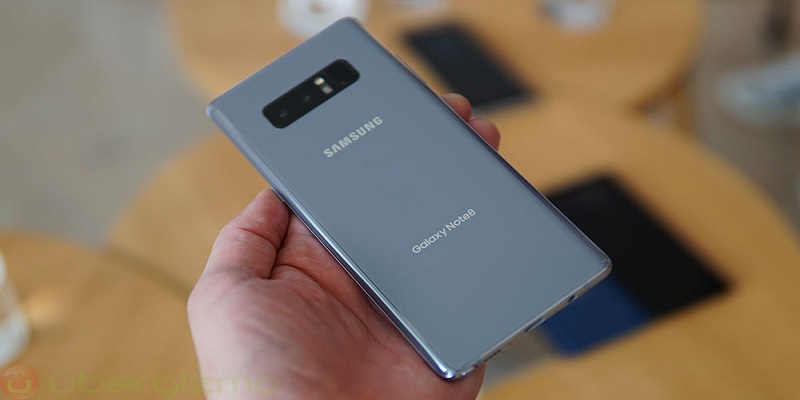 People definitely opt for devices that are highly reliable when it comes to security. The Samsung Galaxy Note 8 is equipped with an iris scanner that will hold the identity of the user in the form of the eye scan and will allow only access to that person. This feature is still not available in the upcoming iPhones. The iris scanner is present just above the display screen. The finger scanner will be present right beside the camera on the rear side. It will make the phone double secure along with the availability of the new iris scanner.

It is all set to make its customers happy by providing them a computing experience while making use of their smart phones only. What only needs to be done is that the smart phone needs to be attached with a monitor and other peripheral devices to give a desktop mode experience to the users that also long for Windows phones.

3 – It Provides The BEAST Mode.

The Beast mode that is so far known to be unavailable in the iPhone 8 is all set to equip its customers with the power of a computer that backs up gaming experiences on the phones. Moreover, the fast charging technology deserves thumbs up! This is definitely great news for all the high tech fans out there.

4 – Support Of The microSD

The apple iPhones keep increasing their prices by forcing their customers on the basis of storage availability. This problem has been solved in the Samsung galaxy smartphones as it provides the maximum space of a microSD card that is 2TB which is the maximum space that is available in the market so far. A microSD slot is an amazing feature that gives an edge to the Samsung Galaxy Note 8 over the iPhones.

Samsung launched its latest phone and it look fabulous. Samsung Galaxy Note 8 has a new look, faster operational speed and pretty much everything you will need in a smartphone. It is expected to compete in the market with iPhone X, so every little detail in the phone will matter. Here is a list of the good the bad points for you to consider before you head out to buy your set of Samsung Galaxy Note 8.

It has the following pros.

Samsung Galaxy Note 8 has the Infinity Display which means there are no bumps and angles, no power buttons or navigation bars. It is all on the touch screen now which will help you navigate your way on the phone’s system. The glass overflows to the sides of the phone giving it a wider and a fuller screen. With 18:9 aspect ratio screen, multi-tasking is going to be much more fun.

It has always been the company to beat at camera quality and this time it has a 12 MP primary and 8MP front camera. The high resolution allows the user to snap the perfect photos in full details. It also enable the user to snap high quality photos at night and in poor lighting conditions.

Samsung Galaxy Note 8 has the world’s first 10nm processor with Qualcomm Snapdragon 835 and Samsung’s Exynos 8895 processors which allows the phones to browse and download in gigabit speed. That is way faster than any network is currently offering.

Samsung Galaxy Note 8 has been IP68 certified which makes it dust and water proof.

It has the following cons.

It is dependent on the internet to bring you the latest chatter on the airwaves for the reason that it has no FM support without the internet.

The battery of this phone is non-removable. Since the glass screen merges with the aluminum back and there being no dents of bulges whatsoever, there is no margin for a detachable case.

The company has faced battery issues before and the customers expected them to really resolve the issue now as well. While the company is boasting a high functioning processer, the battery which is only 3000 mAh does not seem to be enough.

Tips to Update Your Kitchen for Home Improvement